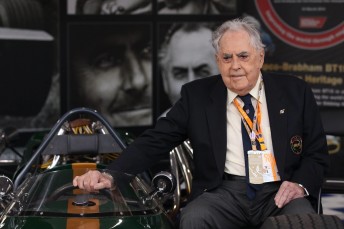 Jack Brabham at the 2014 Australian Grand Prix in March

The remarkable Sir Jack Brabham lived a life most would not dream possible.

Starting from humble beginnings at Hurstville in Sydney Brabham worked on motorbikes as a teenager, juggling jobs while attending night school.

Brabham did not set out to become a racing driver – it just happened.

He spent two years in the air force as a flight mechanic during WWII where he learnt a lot about engines.

After the war ended in 1945, Sir Jack and a mate, who would be the driver, built a speedway car together.

But following a few crashes his mate had no choice but to give it away at the stern order of his wife.

“So I was left with the car and I thought I’d have a go at driving and that’s how I started,” Sir Jack told Speedcafe.com in a lengthy interview last year.

Brabham would famously go on to win the F1 world championship in 1959, 1960 and 1966 during an era that was notorious for being the most dangerous in history with mortality rates among grand prix drivers appallingly high. 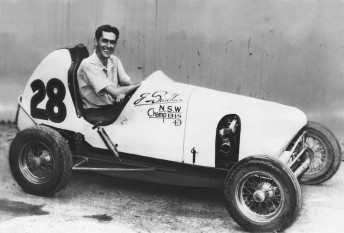 ‘Black Jack’ very nearly lost that first championship when he ran out of fuel at Sebring and was forced to push the car over the line for the last 45 metres.

Brabham dominated in 1960 but when the rules changed to 1500cc engines he was left wanting, with Ferrari becoming the powerhouse.

“The most thrilling win in 1960 was the French GP at Reims when we downed the Ferrari team and everybody said we couldn’t beat them because it was a fast circuit,” he recalled.

The French GP was celebrated vigorously by the drivers and Brabham’s efforts that weekend in 1960 brought with it enough bubbly to throw a party for a small village.

“Part of the prize in 1960 was 100 bottles of champagne for the fastest driver in practice and I won that.

“Then the second day they had another 100 bottles providing the time was better than the first day and I won that.

“I then won the race as well which was another 100 bottles so I had 300 bottles of champagne.” 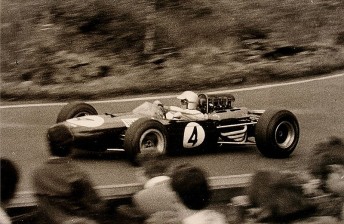 Sir Jack at the Nurburgring in 1965

The celebrations ended though for the following year when Brabham’s considerable nous for engineering would be brought to the fore.

“In 1961 I brought Ron Tauranac over to England and decided to build our own cars under Motor Racing Developments,” Sir Jack recalled.

It was the beginnings of Brabham’s greatest achievement when, in 1966, he managed to win the world title in a car designed by himself using a Repco engine built in Australia.

“Between us (Repco) we built an engine for the new three litre formula and it was very successful. We only used the Oldsmobile block and built the rest of the engine around it,” Sir Jack told Speedcafe.com

When Sir Jack decided to walk away from F1 in 1970, he was torn but ultimately bowed to his family’s pressure.

“We lost three drivers in 1970 – Piers Courage, Jochen Rindt and Bruce McLaren and my father, Tom, urged me to give it away which I did.

“Originally I wasn’t going to drive in 1970 because Rindt was supposed to drive for us but he went and drove for Lotus and was unfortunately killed (Rindt remains the only F1 champion to claim the title posthumously).”

In many ways Sir Jack was a pioneer in motor racing, an innovator and an engineer who would achieve remarkable feats against the might of the finest racing stables from England and Europe.

He built the first rear engined Cooper F1 car in 1955 on a sports car chassis which he raced at Aintree.

Cooper managed to find a sponsor so Brabham could do the 1961 Indy 500 which he finished ninth against considerable odds.

“We only had a 2.7 litre car and we were racing against 4.2 litre engined cars,” Sir Jack said.

“But I was surprised at how well it did and it paved the way for Indy to field all rear engine cars.”

Some of his most colourful stories were revived to Speedcafe.com during the candid interview.

Among them was when he was responsible for smuggling Jim Clark out of Italy in his light plane. 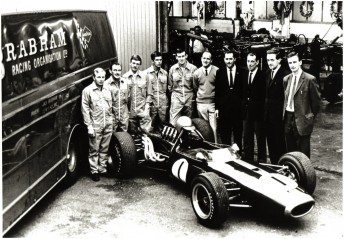 Clark had initially been blamed for the accident which claimed the life of Wolfgang von Trips at Monza in 1961 which also killed more than a dozen spectators.

“Colin Chapman (Lotus boss) came up to me and said in Italy when someone is killed they lock you up until they investigate what happened,” Sir Jack explained.

“We wanted to go back to England so Chapman asked me if I would take Jimmy back in my aeroplane.

“So we had to smuggle him into the customs area and luckily nobody recognised him and we took him out to my aeroplane and hid him in the back and flew him back to England.

“We had said to customs we just want to go out and refuel the plane and when we came back into the building we left Jim in the back of the plane which is how we got him out.”

For all of his personal achievements, it was the feats claimed by his three sons in 1989 which made him feel most proud.

During Brabham’s career there were not only the narrow escapes on the track but also while flying planes.

One was when Sir Jack was flying to a race in Sweden when the engines on the Cessna 310 cut out.

“What happened was one of the fuel tanks had been milked without my knowledge and we were flying over the biggest lake in Sweden,” Sir Jack said.

“When the engines stopped it certainly gets your attention but we managed to switch over to the tank which had fuel in it and fire up the engines again which was a relief.” 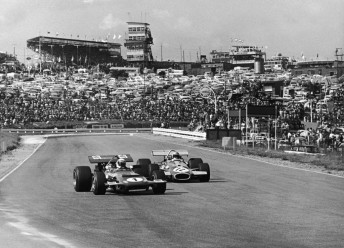 There were also some hijinks with Denny Hulme and Bruce McLaren in 1970 after Brabham won his final grand prix in South Africa.

“We spent some time at Kruger National Park and were told by the people never to get out of our motor car because it was too dangerous.

“Denny had a movie camera and he was filming these monkeys and Bruce McLaren had a packet of biscuits in his hand.

“Then a baboon got up onto the bonnet and looked through the window and could see the biscuits.

“He could see the window was down and he came in through the window and pushed Denny to one side and reached over and grabbed the biscuits and took off.”

Brabham not only survived one of the most despicably dangerous periods in motor racing but he added a rich lustre to its history, providing inspiration for many generations of racers in the process.

His last award of distinction came in 2012 when he was named Australia’s National Living Treasure.

His first wife Betty, the mother of his three boys, died in September last year.