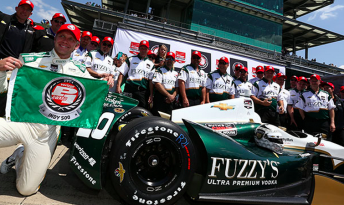 The fastest average qualifying speed for the 200-lap race scheduled for May 25 was the quickest recorded since 2003.

After being cleared to return to driving four days ago, Andretti Autosport’s James Hinchcliffe was second fastest in 230.839 (371.5km/h) while Will Power (Team Penske) completes the front row with a 230.697 (371.27) average speed.

“I was surprised last year and didn’t expect to do it this year with such deep competition,” Carpenter, who finished 10th after leading 37 laps in 2013, said.

“It’s exciting, but after going through this last year and not winning the race I’ve been so much more determined.”

“Now it’s all about the race, and we want to close the deal.”

“It was nerve racking having to come back today and pretty trimmed out and haul it wide open for four laps again and it was harder,” Power said.

“So it was harder. I think a few guys had lifts. Hinch had a lift and Helio (Castroneves) a had lift. We were all on the edge.”

Canadian Hinchcliffe has shrugged aside his head injury following the Indy road course race last weekend when he suffered concussion almost pulled out the fairytale result.

“You earn your money qualifying at Indy,” Hinchcliffe said.

“We got a little bit loose going into turn 3 on that last lap and had to crack the throttle and that’s what killed the final lap. Without that who knows what could have been.”

Team Penske driver and 2000 Indy 500 winner Juan Pablo Montoya was the best out of the qualifiers who shot for positions 10-33, recording 231.007 (371.77) which ironically would have put him second had he made it into the fast nine in provisional qualifying.

Ganassi’s Ryan Briscoe, a former Indy 500 polesitter could only manage 30th while the third Australian James Davison continued his impressive build up to the biggest race of his life and will start from 28th.