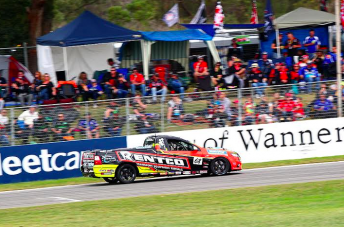 Kris Walton moved to the head of the V8 Ute Racing Series points standings with victory in Round 2 at Barbagallo Raceway.

The Queenslander made it two wins and a second for the weekend by dominating Race 3 from pole position.

“We wanted to win this, it was a special weekend for Rentco so we wanted this round, and I wanted the lead of the championship,” said Walton afterward.

“I want to win the championship and I’m just going to keep trying to keep these results coming for the rest of the year.”

Second place was enough to give Pretty third for the weekend behind Walton and Ryal Harris.

“It all comes down to tyre life, the guys worked really hard, changed the setup every race, and it proved worthwhile in the end.”

Harris was third in the final and now holds down the same position in the standings, 37 points adrift of Walton.

Dixon completed a strong weekend with fourth in Race 3 ahead of Kim Jane and Andrew Fisher.

In the Aussie Racing Car Series, Trent Young ensured he scored maximum points for the weekend by sweeping all four races.

The Toyota driver, who suffered a big crash last time out at Symmons Plains, led home Adam Uebergang and James Abela in the respective Sunday races.