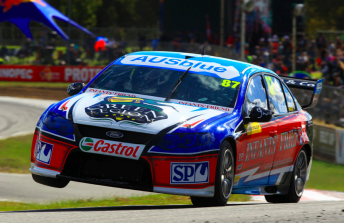 Second place in Race 2 of the weekend was enough to give Ashley Walsh the Dunlop Series round win and points lead at Barbagallo.

Saturday winner and erstwhile points leader Paul Dumbrell did not start the second encounter after being called to a business conference.

Dumbrell’s racing commitments are secondary to his position as CEO at Automotive Brands; having stepped down from full-time driving to concentrate on his business career at the end of 2011.

Walsh now holds a healthy 104 point lead over his rival with four rounds of the season remaining.

The reverse top 10 grid Race 2 was dominated by Andre Heimgartner, who led every lap after beating pole-sitter Paul Morris to the first corner.

Heimgartner’s only true threat had been Cameron Waters, who was closing on the Finance Ezi Ford mid-race when he was forced to retire with a driveline failure.

Heimgartner eventually took the flag three seconds clear of Walsh, who fought through from ninth on the grid.

The second career win secured Heimgartner third for the round behind Walsh and Dean Fiore.

Fiore ran as high as second before succumbing to Walsh in the closing stages.

Both had fought their was through Paul Morris and Todd Hazelwood, with the pair taking fourth and fifth respectively after a race-long battle.

Andrew Jones carved through from the back of the grid to finish seventh ahead of Chris Pither, Aaren Russell, Ant Pedersen and Morgan Haber.

Another to charge was Jack Le Brocq, who finished 16th after being spun to the back in a touch with Pither during the early stages.

The Dunlop Series will continue at the Townsville 400 in July.

See below for the round result