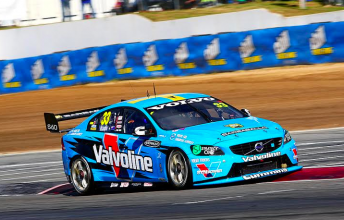 Scott McLaughlin is determined to build on Volvo’s maiden V8 Supercars Championship race win as the team continues to refine its new S60s.

Having scored a front-row start for its very first hit-out in Adelaide, McLaughlin and Volvo continually threatened the top step before breaking through in Race 14 on Saturday.

The win came in convincing fashion, with the Volvo showing superior tyre life to its rivals – an area that had appeared its only weakness in recent events.

“We’re not slowing down I don’t think, we’ve just got to get a few runs under our belt,” said McLaughlin of continuing Volvo’s run.

“We had our first pole this year and we’ve got four now. We just want to keep going and will be working hard to do that.”

Ironically, Volvo’s victory came in the very first race following the introduction of an engine centre-of-gravity regulation triggered by the strength of the lightweight Polestar motor.

Although GRM had heeded a request from V8 Supercars to add strategically placed engine ballast prior to Symmons Plains, more of the weight was required to be placed inside the engine bay ahead of Barbagallo in order to meet the new requirement.

“If they didn’t tell me I wouldn’t know,” said McLaughlin of whether the ballast was noticeable from the cockpit.

“It hasn’t changed the car feel or anything like that. Maybe a smidgeon but nothing ridiculous.”

Saturday wasn’t without drama for McLaughlin, however, as the #33 Volvo cracked a header halfway through the opening 42 lap heat.

While no performance loss was detected by the team, a rush to replace the offending item ahead of the second race almost saw the car fail to make it out of pitlane and onto the grid.

McLaughlin eventually finished fourth; left to rue a decision not to make set-up changes to further improve the car ahead of the second encounter.

“We were a bit nervous about stuffing our good car but you live and learn,” he said.

McLaughlin continues to hold down seventh in the championship after 15 races, 284 points adrift of leader Mark Winterbottom.

GRM will be one of several teams to enjoy its first private test day of the year following this weekend’s Barbagallo meeting after a hectic start to the season.

The Volvo body and engine combination completed just one full test day – the compulsory pre-February hit-out at Sydney Motorsport Park – prior to its race debut.