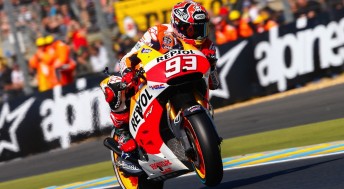 The reigning world champion’s perfect start to the season seemed to be in danger after dropping to 10th position at the start. However, the Honda rider regrouped to produce an impressive fightback to once again obliterate the field.

The result saw the 21-year-old become the youngest rider to win five consecutive motorcycle grands prix. He now holds a 42 point lead at the top of the standings.

It was Ducati’s Andrea Dovizioso who stormed into the lead at the start as pole sitter Marquez was crowded out on the run down to turn 1.

Stefan Bradl slotted into second with Pol Espargaro third and Rossi fourth. Marquez held fifth briefly but he soon dropped all the way down to 10th position after being forced wide by Jorge Lorenzo.

Meanwhile at the front, Rossi surged up to second before he grabbed the lead from Dovizioso.

After dropping to 10th place, Marquez regrouped and by the second lap the Spaniard was on the back of Lorenzo in seventh.

Marquez’s charge continued as he found a way by Bradley Smith, Lorenzo and Dovizioso to move onto the back of the lead group.

The Honda rider then made light work of Bradl to move into third with his next target Esparago following shortly after.

Marquez’s inspiring fightback had allowed Rossi to open up a lead at the front but the six-time MotoGP champion was soon forced to look in his mirrors. A classic duel between the pair appeared to be brewing but a rare mistake from the Italian gifted Marquez the lead.

Once in the lead, the championship leader made no mistakes as he cruised to a comfortable win from Rossi,

A late charge from Bautista saw the Spaniard claim the final place on the podium ahead of Monster Yamaha’s Pol Espargaro and Honda’s Dani Pedrosa.

The MotoGP World Championship heads to Italy’s Mugello circuit for the sixth round of the season on June 1.