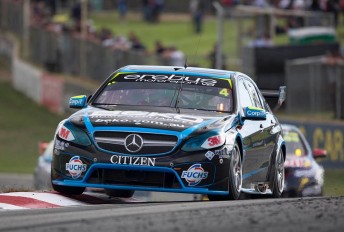 Erebus Motorsport has been handed a $10,000 fine for running an additional steering sensor on its #4 Mercedes-AMG at Barbagallo.

The fine, of which $7,500 is suspended until the end of the calendar year, was handed down by event stewards today following the discovery of the discrepancy during a random inspection on Friday.

Erebus had been granted permission by V8 Supercars to fit a second sensor to its steering rack for the event, but had only been allowed to log data from one sensor at a time.

Erebus general manager Ross Stone told Speedcafe.com that both were in operation during the first two practice sessions due to an oversight from his team.

“Power steering is something that you’re always working on; we had all new stuff (with the Mercedes) after years of using the Ford-based rack,” he said.

“Lee (Holdsworth) wasn’t comfortable with the way it was working, so we asked V8 Supercars if we could run a second sensor and they approved it all, but on the condition that only one sensor at a time was monitored.

“Unfortunately the communication inside our team wasn’t good enough and both were left hooked up.

“It was no big deal. We hadn’t even looked at the data because it was only something we were going to look at when we got home.”

Holdsworth was also excluded from the practice session results; which is the recommended penalty listed for ECU & Data Systems breaches in V8 Supercars’ recently released table.

The stewards added the $10,000 fine to the punishment on the grounds that disqualifying Holdsworth from the practice result had no direct consequence to the team.

Stone was highly critical of the decision.

“I really feel they have no understanding at all,” he said.

“I’ve really lost a lot of confidence in that whole procedure and set-up with the way they handled it.”

Holdsworth would likely have been disqualified from the entire weekend’s results had such a breach been discovered at the conclusion of the meeting.