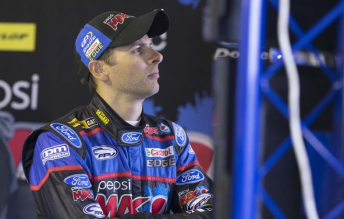 Mark Winterbottom claims he has the best V8 Supercars co-driver in Steve Owen ahead of Ford Performance Racing’s attempt to defend its 2013 Bathurst 1000 victory.

Richards was poached by Red Bull Racing Australia at the end of last year to line-up alongside Craig Lowndes.

Owen signed a two-year co-driving deal with FPR last year, moving to Winterbottom’s car after pairing with Will Davison in 2013.

“Steve is highly-rated, highly-credentialed and is the only driver the team and I wanted to pair with to defend our Bathurst title,” said Winterbottom.

“He has experience of the team from last year when he also worked with my engineer, Grant McPherson, so the only thing we have to do is get us both comfortable in the car and away we go.

“He will bring fresh ideas and has a lot of experience – in my opinion, Steve is the best co-driver in the business.

“He is the right person to help us as we try and go back-to-back at Bathurst.”

Owen is without a full-time drive in any class this season, but recently raced in the Dunlop Series at Winton, and will also enjoy a GT outing with businessman Roger Lago at the upcoming Spa 24 Hour.

“I enjoyed working with FPR last year and know Mark, Grant and the rest of the engineers and mechanics from that experience so that means we can just get on with the job with no fuss,” said Owen.

“The team is obviously on form, they’ve won at every track on the calendar and now they’ve experienced a Bathurst victory so they know what it takes to get the job done.

“Mark and I are of a similar age and we’re both pretty relaxed guys so I am looking forward to the year ahead.

“There is no reason we can’t challenge for the overall Enduro Cup and of course, another win at Bathurst.”