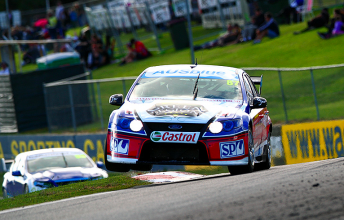 Ashley Walsh rewarded his hard working Matt Stone Racing crew with pole position for Round 3 of the Dunlop Series at Barbagallo.

The Ford outfit was forced to perform a hurried engine change prior to the session after discovering a problem during the motor’s warm-up procedure.

Once on track, Walsh proved unperturbed by the drama, clocking the fastest three times of the session on the way to his first Armor All Pole Award of the season.

Morris had proved the fastest man in the bottom 50 percent segment of the two-part qualifying hit-out.

The first of two 38 lap races for the Dunlop Series this weekend will kick-off at 1325 local time.

See below for the Dunlop Series qualifying result