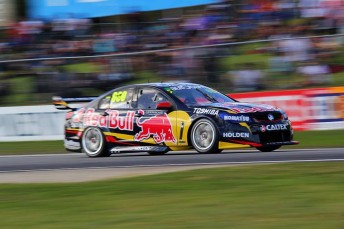 Craig Lowndes returned Red Bull Racing Australia to the top of the podium with a controlled win in Race 15 of the championship at Barbagallo.

Making a strong start from pole position, Lowndes led every lap outside of the pitstop cycle to snap Red Bull’s eight-race losing streak.

Starting fifth, Winterbottom made short work of Russell Ingall in the early laps to run fourth.

The FPR Falcon then kicked off the pitstops on Lap 16 – using the undercut to leap-frog both Whincup and McLaughlin.

Lowndes covered the early Winterbottom stop by pitting just one lap later before proving able to hold a comfortable two second lead throughout the second stint.

Whincup completed the podium ahead of McLaughlin, whose Volvo also lost out to the Red Bull entry in the pitstop, and lacked the speed advantage it enjoyed in the day’s earlier heat.

Mostert spent much of the second stint tucked in behind the Volvo before losing fifth to Coulthard with just a handful of laps remaining.

As was the case in Race 14, the Lucas Dumbrell Motorsport Holden proved unable to hold its promising third place grid position in the early stages; dropping to seventh by the start of the pitstops.

Unlike the earlier heat, no teams gambled on running the entire 42 laps without a stop.

See below for the full race result for Race 15