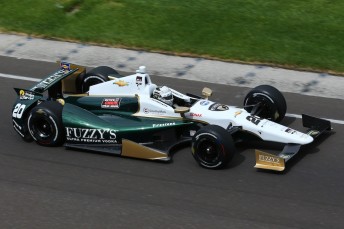 It was the fastest practice lap at the famed speedway since Scott Dixon’s 233mph lap on pole day in 2003.

Carpenter’s team-mate JR Hildebrand was fourth ahead of Josef Newgarden.

“The car is definitely up to speed this year,” Carpenter said.

“When it comes to predicting the pole, I think a lot of it will be figuring out what the weather is.

Ryan Briscoe and Will Power were 21st and 22nd best respectively in the rain-shortened practice 6 which saw only 26 of the 33 cars post lap times.

The third Australian James Davison was one of the seven entries not to circulate.

The first round of qualifications start tomorrow with starting positions, including the Verizon P1 Award, determined in the second round on Monday morning that will be highlighted by the shootout of the fastest nine cars for pole.

James Hinchcliffe (Andretti Autosport), back behind the wheel after being cleared from his head injury, turned a total of eight laps to be 11th fastest.

See below results from practice 6