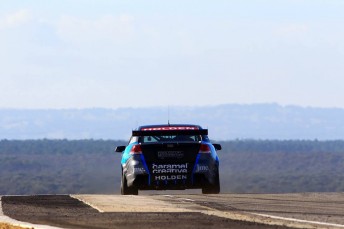 Paul Dumbrell extended his Dunlop Series points lead by beating Ashley Walsh in Race 1 of the weekend at Barbagallo Raceway.

Starting second, Dumbrell won the drag race against pole-man Walsh to the first corner and was not headed for the duration.

Walsh stalked his rival until a spin from Morgan Haber at Turn 6 triggered the Safety Car with just five laps to go.

Time constraints ensured that the race finished under the yellow flags, denying what had shaped as a thrilling conclusion.

Dean Fiore had been keeping a watching brief on the leaders to end up third, with Chris Pither, Todd Hazelwood and Jack Le Brocq completing the top six.

Cameron Waters took the flag seventh. The FPR Falcon moved up to second in the early stages when he was handed a drive-through penalty for a pre-race infringement.

His crew was still filling the dry ice container for the cool suit system when the ‘1 minute’ signal was issued on the grid.

Rejoining from the penalty in 15th, the fired up Waters overtook eight cars in the remaining 22 laps to the flag.

It was also a tough afternoon for fellow title contender Andrew Jones, who was forced to pit for repairs after an early-race scuffle with Garry Jacobson.

Jones was 24th in the final classification, with Jacobson 11th – narrowly missing pole for the top 10 reverse grid Race 2.

That honour will go to Paul Morris after the veteran trailed Andre Heimgartner to the flag in 10th.