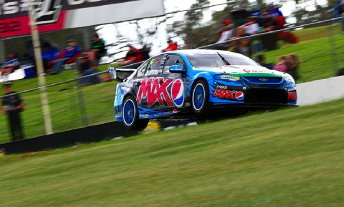 V8 Supercars front-runners are expecting at least one of their rivals to adopt a high-risk strategy in order to vault into contention during the opening two races at Barbagallo.

While pitstops are not usually seen during the two 100km Saturday legs of the Super Sprint format, the Perth venue’s abrasive surface ensures that a four-tyre change is anticipated in each race.

Attempting to run the entire 42 laps on just one set, however, is being touted as an attractive risk for those willing to gamble in the hope of a strong result and increased television exposure.

Starting 22nd, Fiore led the race with as little as eight laps to go, before eventually sliding back to finish a still competitive 13th.

“But the majority will stop. Forty-two laps around here is a long way on a set of tyres.”

The short length of the pitlane and relatively strong passing opportunities at Barbagallo both lend themselves to the no-stop strategy.

The possibility of a Safety Car, however, tips the scales in the opposite direction, with anyone who does take the gamble completely taken out of contention by a full-course yellow.

“It’s a massive risk if you don’t pit and everyone else does,” added Jason Bright.

“But Fiore looked pretty good last year and I thought that if we had of stayed out, we probably would have won that race.

“It’s hard to know what everyone will do. I think we’ll just play it by ear. It depends where you’re running and how your tyres are hanging in.

“The conditions will play a big part as well. The sun on the track during practice seemed to have a pretty big affect.

“Last year it wasn’t as warm as it was during practice, so the tyre life might not be as good this year.”

The Barbagallo tyre allocation ensures there is enough fresh rubber to complete four-tyre stops in both races, with seven sets available across Saturday and Sunday.

Wet weather could also wreak havoc with team strategies, as isolated showers are predicted to hit the circuit throughout the day.

Wet V8 Supercars races have been a rarity in recent years, with the most recent coming at last year’s Australian Grand Prix meeting.