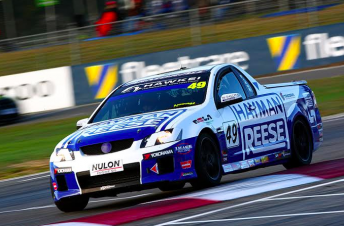 Working his way through to the lead by the sixth of 19 laps, Dixon went on to record a comfortable eight second victory over opening race winner Kris Walton.

“It feels a bit surreal at the moment, it was a good race, the car was really strong so a big credit to the team, they’ve done a great job all weekend,” said the Holden driver afterward.

“We didn’t qualify too well so this is a really good way to pick up from that and a big thanks to all my family and friends and sponsors.”

Nathan Pretty took seventh having made steady progress from 13th on the grid.

It had been a Ford benefit in the opening encounter, with Walton overtaking pole-stter Ryal Harris in the early stages before clearing out to a three second win.

A third and final race will complete the weekend’s V8 Ute action on Sunday.

Saturday at the Perth 400 also saw the opening two races for Round 3 of the Aussie Racing Car Series.