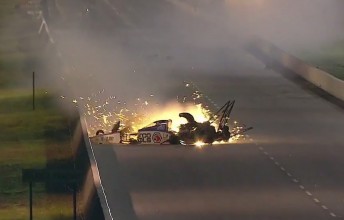 Brown’s car comes to rest after the explosion

NHRA drag racer Antron Brown has walked away from a major crash during qualifying in Atlanta.

Brown had just completed what would be the second fastest qualifying pass, when the engine let go and destroyed a rear tyre and sent him into the fence.

Safety crews were quickly on the scene as the Matco Tools Top Fuel driver walked away from what was left of the chassis.

Brown will need to switch to a spare chassis for the rest of the weekend.

Brown holds a 37 point lead in the standings from Doug Kalitta ahead of Sunday’s elimination rounds.