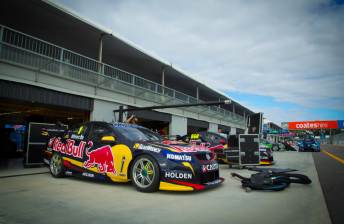 The 2015 V8 Supercars Championship calendar continues to take shape ahead of a scheduled September reveal.

The category has set a firm marker for finalising its schedule ahead of what will be the first year operating under the new Fox Sports-Network Ten media rights deal.

Unlike last year, the basis of the calendar is already set, with key street events in Townsville, the Gold Coast and Sydney having been the subject of multi-year extensions during 2013.

The season is confirmed to again kick-off with a pre-season test at Sydney Motorsport Park and opening championship meeting in Adelaide.

The Clipsal 500 Adelaide is thought likely to feature more twilight racing in 2015 after its first taste of the concept this year.

V8 Supercars had planned a minimum of five twilight events for 2014, but was forced to delay its prime-time television ambitions for a further 12 months amid the fall-out from the new media deal.

A resolution to a potential date clash between the Supercheap Auto Bathurst 1000 and the AFL grand final, as well as continued work on international fixtures, remain the biggest unknowns ahead of the new season.

The AFL, whose full fixtures are not usually released until late October, is yet to confirm the date for its final; but has flagged the October 10 date as a possibility pending the venue requirements of the Cricket World Cup in March.

Although stressing that no firm decisions have been made, V8 Supercars CEO James Warburton recently hinted to Speedcafe.com that Bathurst is unlikely to be shifted from its now traditional second-week-in-October date.

“We’re pretty happy with our weekend and the fact that we don’t race on the Saturday (when the AFL match is played), so we’ll just wait and see what plays out,” he said of what will potentially be the first clash between the two events since 1994.

“It’s less than ideal (to clash) but there are other situations for us in terms of the calendar and other events at that time.

“We’ve obviously got Gold Coast two weeks later, so we’ve got to be very careful about protecting that part of our calendar.”

Amid continued uncertainty over the plan to return to Austin, Texas in 2015, much of the championship’s international focus is now understood to centre around the Asian region; which provides attractive freight costings and television timezones.

V8 Supercars has been working with its teams and logistics partner Gibson Freight in order to slash the costs associated with exporting the category.

“We regard it as import (logistics), but we also regard the timezone that the races come back and the like as critically important as well,” explained Warburton, underlining the need for international races to work for the Australian audience.

“We are and will always be an Australian championship first and foremost.”

One element that television will not decide, however, is the status of the Australian Formula 1 Grand Prix support races at Albert Park.

Although the alignment of the Australian F1 and V8 broadcast rights on Ten immediately triggered hope that the AGP sprints would count for points from 2015, Warburton has confirmed that the final decision will be in the hands of Formula One Management.

The V8 Supercars and their Group A touring car forerunners have never before raced for championship points in 29 years of supporting the Australian Formula 1 event.

See below for Speedcafe.com’s Form Guide for the Perth 400