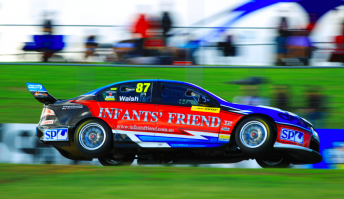 Ashley Walsh emerged quickest from both practice sessions ahead of what promises to be a hotly contested third round of the Dunlop Series at Barbagallo.

The Matt Stone Racing Ford clocked a best of 57.8s in the morning’s 40 minute hit-out before improving to 57.6s in the afternoon.

Ford Performance Racing’s Cameron Waters proved just 0.018s shy in second, while Garry Jacobson was also within 0.1s of the pace in his Eggleston Motorsport Holden.

“We made some changes between P1 and P2 to tune the car up for the green tyre,” said Walsh.

“We missed the boat a bit on the first run but a few tweaks and the second run was much better.

“I think we know what direction we need to go for qualifying.”

Having won the previous round at Winton, Walsh sits just 22 points behind series leader Paul Dumbrell heading into the opening Barbagallo race.

“I have always liked this track,” continued Walsh, who took out the Barbagallo round on the way to second in the final standings last year.

“I just seem to click with it and when the car is good we do go well.

“The Infants’ Friend Falcon was great here last year and coming into this weekend the car has been quite good right from the start.

“I am looking forward to qualifying now.”

Joining the series in MW Motorsport’s #27 Ford this weekend, Fiore missed the second half of opening practice after a collision with Dan Day’s Holden.

Fiore was collected by the Holden as it exited the pits, bending his Falcon’s differential housing.

In other Barbagallo support action, Ryal Harris led a Ford sweep of qualifying for the V8 Ute Racing Series.

Trent Young proved the pace-setter in the Aussie Racing Cars to take pole for the pint-sized class, edging out Maurice Masini.