Rossi and Lorenzo keen to stay with Yamaha

Rossi and Lorenzo keen to stay with Yamaha 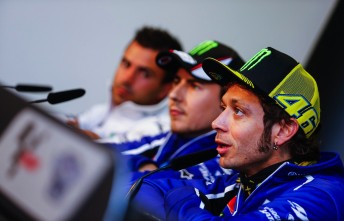 MotoGP stars Valentino Rossi and Jorge Lorenzo have declared intentions to stay with the works Yamaha team for next season.

Six-time MotoGP world champion Rossi revealed in Thursday’s press conference, ahead of this weekend’s French Grand Prix, that he hopes to sign a new two-year contract with the squad.

Rossi originally joined Yamaha in 2004 where he went on to win four world championships before a shock move to Ducati in 2011. The Italian rejoined Yamaha last year but his second stint has yielded just one victory so far.

“My project is to make another contract for two seasons and I think in the next weeks, during the next races we will talk with Yamaha in order to continue,” said Rossi.

“Sincerely I feel better and I am enjoying it a lot, to continue to race and to work with Yamaha and my team.

“Last year I had some good races, one victory, but in the second part of the season I was a bit too far from the top three. So I wanted to see if this year would be any better.”

Meanwhile, his double world champion team-mate Lorenzo was also quizzed about his future which resulted in the Spaniard claiming he wishes to end his career with the Japanese manufacturer.

“My priority is to stay at Yamaha and I would like to stay with the team until the end of my career. But I am focused on working at the track and my manager works on talking to the team about the future,” said Lorenzo.

The news follows reigning world champion Marc Marquez’s announcement of a new two-year contract keeping him at Honda until the end of 2016.

*Stay with Speedcafe.com for all the latest news from the French Grand Prix this weekend