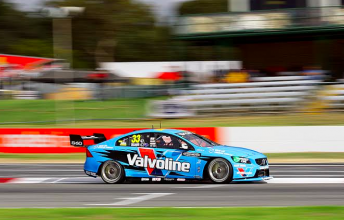 Scott McLaughlin proved a quarter of a second quicker than the field as the pace increased in the second practice session at Barbagallo.

Will Davison, David Reynolds and eventually McLaughlin popped to the top of the order, with the Volvo running consecutive laps of 56.21s and 55.92s to end up with the two fastest times.

Reynolds’ effort proved good enough for second fastest, albeit 0.25s behind the Volvo.

Coulthard was third after a late lap of his own, ahead of Mark Winterbottom, Davison and Dale Wood.

Nick Percat, Jack Perkins, Tim Slade and Rick Kelly completed the top 10, with Slade having spent the middle part of the session atop the order.

The tough slog meanwhile continued down at Red Bull Racing, with Jamie Whincup and Craig Lowndes 22nd and 23rd respectively.

The third and final 20 minute practice session of the day is scheduled for 1410 local time.