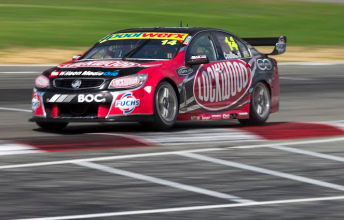 Fabian Coulthard concluded a strong day for the Lockwood Holden by topping the third and final 20 minute practice session.

“It’s a good start, especially after New Zealand we struggled a bit there,” said Coulthard, who finished all three of the day’s sessions in the top five.

“It’s only practice, but to bounce back in that sort of fashion is positive.

“We need to do that in qualifying when it counts, but it’s a very good start.”

Courtney had held sway at the top for much of the third session before Russell Ingall, Mosert and eventually Coulthard all improved in the final four minutes.

After spending most of the day towards the bottom of the time sheets, the move to green tyres saw Jamie Whincup end the final session third.

David Reynolds was the second of the Fords in fourth ahead of an impressive Robert Dahlgren and Mark Winterbottom.

McLaughlin’s Practice 2 effort was, however, enough to put the #33 S60 sixth on combined times.

“The car is alright,” he reported.

“It’s a little bit hard to know where you’re at… probably until qualifying we don’t know, but it’s not too bad.”

Ingall was demoted to seventh in the dying minutes ahead of Dale Wood, Courtney and Craig Lowndes.

Like his team-mate, Lowndes had spent the majority of the day down the order, but emerged confident after the final hit-out.

“We started the day a little frustrated but at the end of it all we’re happy,” he said.

“At the end of the day we put on a fresh set of tyres, got a set up that we were hopeful that would work and as a combination it was successful.”

The third session was held in dry and sunny conditions, with a brief shower in the late morning proving the day’s only weather interruption.

The V8 Supercars will return to the track tomorrow for two qualifying sessions and two 100km races.