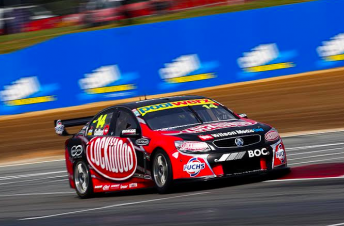 Fabian Coulthard kicked-off his weekend at the Perth 400 by edging fellow Holden driver James Courtney to the fastest time in a tight opening practice session.

Courtney’s Holden Racing Team entry had spent the majority of the 20 minutes atop the time sheets.

The former V8 Supercars champion clocked a best of 56.42s at the end of his first of three runs, which Coulthard eventually eclipsed by just 0.0075s as the chequered flag flew.

Coulthard had spent the early part of the session bedding brakes on pre-marked hard tyres, before switching to the softer rubber.

A 56.44s put Coulthard second after his second run, before concluding the session with his 51.41s best.

Scott McLaughlin split the trio in his Volvo, while Nissan and Mercedes-AMG were too represented in the top 10 thanks to Michael Caruso (ninth) and Lee Holdsworth (10th).

Among those down the order were Red Bull team-mates Craig Lowndes and Jamie Whincup, who ended up just 19th and 24th respectively.

The teams enjoyed a dry track for the duration of Practice 1, despite heavy cloud cover rolling in ahead of what is expected to be a wet afternoon.

The second of three 20 minute practice sessions for the day will get underway at 12:10 local time.

See below for Speedcafe.com’s Form Guide for the Perth 400