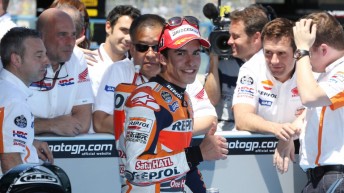 Marc Marquez to stay with Honda until the end of 2016

Reigning MotoGP world champion Marc Marquez has inked a new two year contract to keep him at Honda until the end of 2016.

The 21-year-old, who has won all four of this season’s grands prix, has agreed the new deal to stay with the factory team ahead of this weekend’s French Grand Prix at Le Mans.

Since joining the Honda last year, Marquez has cemented himself as the team’s number one rider after an unprecedented rookie year that saw him claim the world championship at his first attempt.

The Spaniard is the youngest world champion in the history of motorcycle grand prix racing.

Marquez has won 10 races for Honda in 22 appearances and has only finished off the podium twice since moving to MotoGP.

“I am very happy to announce my renewal with HRC,” said Marquez.

“I had always dreamt about being part of the Repsol Honda Team, and thanks to Honda the dream came true a year and a half ago.

“Everything happened very quickly last season, and I would have never imagined that I could achieve what we did.

“Becoming World Champion during my first season was another dream which became reality.

“It is a great honour to be a part of the Honda family and I’m glad to remain with this special group of people for another two seasons.”

Marquez’s Honda team-mate Dani Pedrosa, who is out of contract at the end of the season, is yet to agree a new deal.

Stay with Speedcafe.com for all the latest MotoGP headlines from this weekend’s French Grand Prix