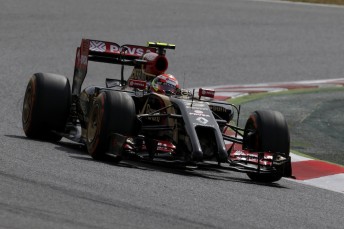 Pastor Maldonado tops the final day of the Barcelona test

Pastor Maldonado ensured Lotus came out on top in the final day of the official Formula 1 test at Spain’s Catalunya circuit.

The Venezuelan racer posted a 1.24.871s effort on super-soft tyres in his final run at the Barcelona circuit to end the session on top of the time sheets by almost a second from Mercedes’ Nico Rosberg.

Maldonado, who recored 102 untroubled laps, initially set the pace in the morning running on soft tyres before Rosberg reclaimed the top spot shortly after action recommenced in the afternoon.

Mercedes day began with Rosberg trialling a new ‘megaphone‘ exhaust designed to increase the sound of the Mercedes V6 power pack. The team reverted to the conventional exhaust for the remainder of the day.

Kimi Raikkonen lifted spirits in the Ferrari camp as the Finn set the third fastest time after completing 93 laps. Raikkonen, who suffered an engine failure on Tuesday, was 1-6 seconds adrift of Maldonado.

Sauber’s Esteban Gutierrez was half a second down the road in fourth despite his team having to deal with a small fire which broke out at the rear of his car just before lunch. The Mexican’s late run took him above Williams‘ Susie Wolff making her debut behind the wheel of the FW36. The former DTM driver, who will make her maiden F1 Friday Practice appearance at Silverstone in July, completed 55 laps achieving a best time of 1.27.280s.

Wolff did bring out the red flags after a spin at turn 10 in the morning but she steadily improved throughout the day.

Marussia’s Jules Bianchi posted the sixth fastest time ahead of Red Bull’s Sebastian Vettel, who recorded 72 laps after gearbox issues saw him stuck in the garage for the first two hours.

Caterham did not take part in the session due to the extensive chassis damage to Kamui Kobayashi’s car incurred on Tuesday.