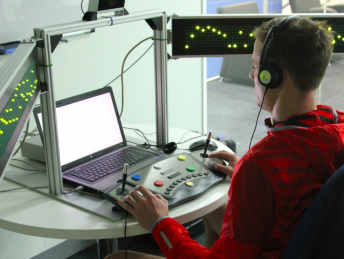 Ford Performance Racing has become the test bed for the latest in sports neuroscience methods designed to improve performance levels.

Team physio Glenn Lindsay has an agreement with the Australian arm of Austrian company Schuhfried, which leads the way in neuroscience research, and introduced the program under a brief trial with the V8 Supercar squad.

The program tests a myriad of biometric areas including pyschomotor, pyschometric and cognitive skills.

Lindsay, who has a wealth of experience previously working for the former F1 team Jordan and NRL, NBL and British Olympic and Paralympic teams, says neuroscience is the new frontier of developing drivers and teams into winners.

“In terms of fitness and cardiovascular endurance we are getting to the point of what else can we possibly do,” Lindsay told Speedcafe.com

“We’ve never really explored the cognitive functions of a race driver or an engineer and asked specific questions about what makes them good at what they do.

“With the latest research coming out in neuroscience, there is evidence to support the ability of the brain to structurally and chemically change or reorganise itself. “It’s been shown that you can improve performance massively by targetting the brain and that is called plasticity.

“Drivers can look more closely and accurately at the intricacies of their own psychomotor and psychological abilities and hence their performance capabilities.”

The psychometric program was used in the widely publicised Red Bull Stratos project in 2012 when Austrian base jumper Felix Baumgartner leapt from 39km to break the world record for the highest parachute jump.

In the lead-up to the attempt, Baumgartner almost aborted the program after suffering from severe claustrophobia while training in his space suit.

However, by using the cognitive training and biofeedback that Lindsay used for the FPR tests, Baumgartner was able to overcome his fear to fall from space and become the first human to break the sound barrier without any form of engine power.

Lindsay would like to see the program picked up by V8 teams and other elite sporting bodies in Australia.

“These days, drivers and teams need to constantly seek and maintain a competitive edge against an ever-increasing and complex standard,” he said.

“Our drivers and pit crews are certainly getting much fitter but whilst fitness is a massively important part of the equation, it simply isn’t everything.

The specialist equipment, computer programs and expertise which Lindsay has access to gives race teams a way of precisely testing their fundamental performance requirements.

“Perhaps more importantly, teams and drivers can now also access the equipment and expertise by which many of these identified weaknesses can be trained and improved upon.”

See below for Speedcafe.com’s 40-page Form Guide for this weekend’s Perth 400