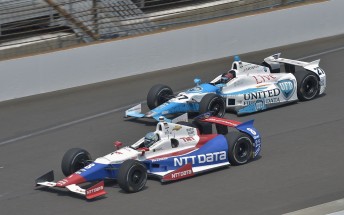 EJ Viso topped the third day of practice for the Indianapolis 500 with the session cut-short by three hours when rain and thunderstorms struck the speedway.

The top 10 was filled out by Josef Newgarden, Sage Karam and Takuma Sato.

Viso, who is standing in for the injured James Hinchcliffe, said he has immediately felt comfortable in the car despite not driving for eight months.

“Whatever his (Hinchcliffe’s) crew and engineer had planned to test and experience, I’ve been doing,” Viso said.

“It has been a quick adaptation to the team for me and so far it’s all been pretty positive.

“When you are driving a car that’s already up to speed and you know it’s capable of doing something, you feel very safe.

Sebastian Saavedra was caught out by the conditions, turning a total of seven laps before the sessions was halted just over three hours before its scheduled 6pm close.

Aside from Hinchcliffe, Australian James Davison and veteran Buddy Lazier are the only two drivers among the 33 entries yet to have turned practice laps.

See below for day 3 practice results