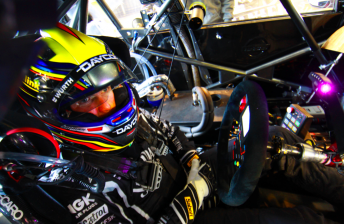 Nissan Motorsport has confirmed the third of its four endurance pairings, with David Russell returning to the team to co-drive with Rick Kelly.

This year will mark Russell’s fourth endurance campaign for the Melbourne-based outfit, having previously partnered Rick in 2012 and Todd Kelly in 2011 and 2013.

Russell has a best finish of 15th in five career starts in the Supercheap Auto Bathurst 1000, with his efforts in last year’s race memorably thwarted by an early collision with a kangaroo.

“David has been a part of Kelly Racing and Nissan Motorsport for many years now, so it’s a great opportunity for him to join us again this year,” said Rick Kelly.

“That consistency with us is definitely a great thing, he fits in the car very well and his performance as a co-driver is right up there at the top level.”

Added Russell: “It’s fantastic to be joining the Jack Daniel’s side of the garage again, it’s four years in row now, so I guess I must be doing something right.”

Although Russell does not currently race full-time, he will enjoy several outings this year alongside Brisbane-based GT racer Roger Lago.

The pair will team up for the Australian GT and Carrera Cup races at Phillip Island later this month, before embarking on a Spa 24 Hour campaign in July.

Nissan has already confirmed Michael Caruso/Dean Fiore and James Moffat/Taz Douglas pairings for its Norton-backed entries, while a co-driver for Todd Kelly will be announced in the coming weeks.

It is expected that the fourth driver will come from Nissan’s global exchange program, which saw Briton Alex Buncombe cut laps with the team at the pre-season Sydney Motorsport Park test.

Lucas Dumbrell Motorsport is however known to have approached Dane Jan Magnussen for a possible berth in its Holden.

A former British Formula 3 rival of Ingall’s, Magnussen previously teamed with the two-time Bathurst winner at the Gold Coast 600 in a Paul Morris Motorsport Holden.

The only other remaining endurance seat lies alongside Dale Wood at Brad Jones Racing, which has for the last two years been occupied by the team’s Dunlop Series driver, Chris Pither.