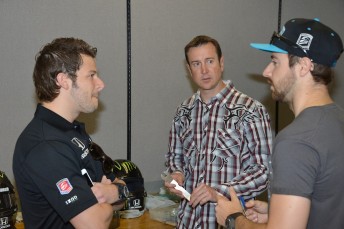 The clock is ticking for injured Andretti Autosport driver James Hinchcliffe to gain medical clearance for the Indianapolis 500.

While he has been cleared by medical staff to resume light training duties, Hinchcliffe has not yet been given any indication of when he may be given the green light to drive.

Practice continued for a third day at the Indianapolis Motor Speedway ahead of this weekend’s qualification and pole day that will determine the 33-car grid for the Indy 500 on May 25.

A statement put out by IndyCar said that further assessment of Hinchcliffe’s condition will be on Thursday.

The popular Canadian was struck in the head with what is believed to be debris during the inaugural grand prix of Indianapolis last weekend.

No details have been forthcoming of how the accident happened and indeed what object struck Hinchcliffe causing him to briefly lose consciousness and suffer concussion.

IndyCar medical director Dr Michael Olinger said the driver was progressing well and was clear to resume light training with his fitness coach.