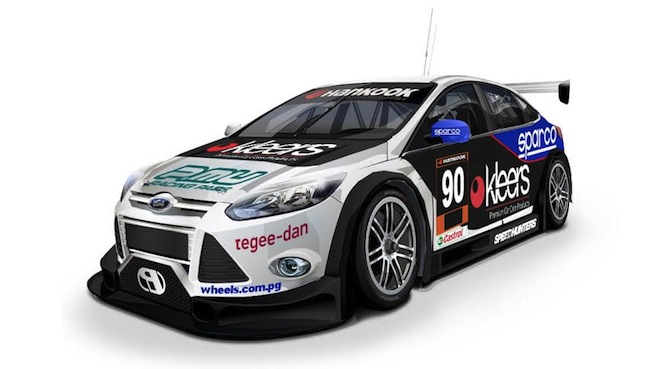 Kassulke’s Focus will sport a new livery at Zandvoort

A full roster of nine drivers have been secured for the European debut of Ryan McLeod’s three MARC Focus V8s at Zandvoort in The Netherlands.

The cars, which were last raced in February’s Bathurst 12 Hour, will soon arrive at their remote base in England ahead of a five-month overseas stay.

They will race in three Creventic endurance series events – the 12 Hours of Zandvoort, 24 Hours of Barcelona and 12 Hours of Hungary – before heading back to Australia.

The Zandvoort event, which takes place on May 30-31, will be immediately followed a second fixture at Spa-Francorchamps, where the Fords have been entered in the Dutch Supercar Series and Britcar races.

As was the case at Bathurst, car owners Keith Kassulke, Mick Benton and Jake Camilleri underpin the driver line-ups for their respective cars.

Australian drivers fill-out the roster, with Benton joined by Hardian Morrall/Peter Leemhius, and Camilleri partnering with Malcolm and Brett Niall.

The cars will race in the Special Purpose 2 class, which also features a pair of French-run endurance specials fitted with BMW 1 Series bodies and 6.2 litre V8 engines.

The SP2 cars will be second only in performance to the 11 GT3 entries, ensuring that a top 10 outright finish is a clear goal for the Australian entries.

“We’re really looking forward to it,” McLeod told Speedcafe.com of the endurance campaign.

“Zandvoort will be the international debut for the cars and from what we’ve seen so far we expect them to handle the European circuits quite well.

“I’m quietly confident that the cars will put in a good showing.”

The cars will be run by a crew of 12 Australians, including former V8 Supercars Championship winning engineer Paul Forgie, with further help sourced locally.

Construction of a further two new cars is meanwhile underway in Queensland, with McLeod planning a return to the Bathurst 12 Hour next year, as well as a full attack on the Creventic series.

“We’re looking towards the 12 Hour next year, where there’s a shipping date clash with (the 24 Hours of) Dubai,” McLeod said of building two more cars.

“We want to do the full Creventic series and there’s a bit of interest in doing the 12 Hours of Sepang as well, so we need cars in different places to be able to achieve all of those different things.”

The two new cars will sport the same 5.0 litre Ford Coyote V8 engines as the first batch of three, although McLeod says that his team is yet to commit to what bodywork package they will run.