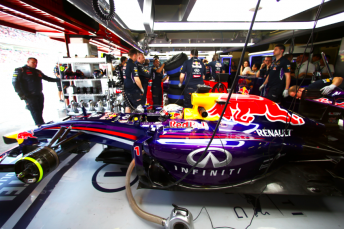 Buemi, a long-term Red Bull servant whose three-year stint as an F1 full-timer with Toro Rosso ended in 2011, has been called up to undertake simulator correlation running on Tuesday.

“On the first day we’ll be doing a lot of stuff with Buemi,” confirmed Red Bull engineering co-ordinator Andy Damerum.

“He’s our main simulator driver, so we’ll be doing some correlation work on set-up changes to make sure the simulator is behaving as it should be, which is quite important.

“We’ll be running through aerodynamic tests, mechanical tests and then when Sebastian jumps in, there’ll be more of the same.”

The Barcelona running is one of four in-season tests introduced this year, alongside the already completed two days at Bahrain and upcoming Silverstone hit-out that will follow the British Grand Prix in July.

Each team is required to dedicate one out of the total six days to tyre development with control supplier Pirelli.

Sauber and Toro Rosso will be working alongside the Italian manufacturer on Tuesday, with McLaren and Force India doing likewise the following day.

Buemi is one of seven test drivers expected to enjoy seat time at the test.

Susie Wolff will get her first laps of the year at Williams, while Stoffel Vandoorne (McLaren), Charles Pic (Lotus), Daniel Juncadella (Force India), Giedo van der Garde (Sauber) and Robin Frijns (Caterham) will also be present for their respective teams.

Championship leaders Mercedes will use their two star drivers in Lewis Hamilton and Nico Rosberg at the test, where the team plans to evaluate a ‘megaphone’ exhaust on behalf of the category.

See below for the Barcelona test line-ups