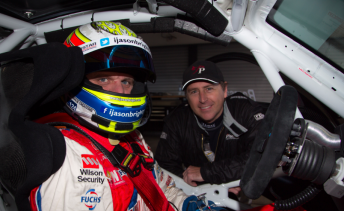 Jason Bright will make his Carrera Cup debut in the category’s Pro-Am meeting at Phillip Island, linking with a family that played a key role in the now V8 Supercars star’s junior career.

Bright will co-drive alongside South Australian Brenton Ramsay, who has entered the Porsche class full-time in 2014 after forming Phenix Racing with his father Malcom.

The Ramsay duo previously ran the highly successful Birrana Racing outfit in the since defunct Formula Holden, fielding Bright in the 1996 and 1997 seasons.

Bright beat Jason Bargwanna to the title in his second season with the team, while Brenton drove Birrana’s other chassis.

“I’m going back to an earlier point in my career with the team,” said Bright.

“It’s great catching up with all the guys who I was working with 17 years ago.”

Bright tested the Phenix Porsche at Phillip Island last week ahead of the May 23-25 event. 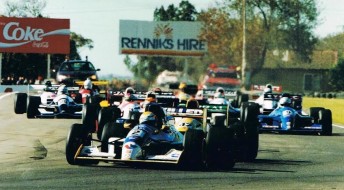 “It looks as though it is going to be a great field at Phillip Island with a lot of talented drivers coming into the category, including a few V8 Supercar drivers I usually race against,” he said.

“I heard a lot of great things about the Carrera Cup races at Rennsport last year so I’m looking forward to the coming Phillip Island event.”

The 41-year-old Bright has not previously raced a Porsche, but has recent experience of GT machinery.

He drove a Ferrari 458 GTE for 8 StarMotorsport in last year’s Le Mans 24 Hours, before making ill-fated attempt at February’s Bathurst 12 Hour with Rod Salmon’s Audi team that ended in a heavy qualifying crash.

Ramsay expects Bright’s set-up feedback and coaching will help the #22 VIP Porsche’s assault on the Elite Class over the remainder of the Carrera Cup season.

“To have him jump in the car and provide such valuable feedback and tuning is just priceless.

“Already we are making good progress and improving the package following his first stint.

“I’m excited about the Pro Am concept and really looking forward to partnering with Jason and learning from him.”

Ramsay sits seventh in the Elite points after the opening two events of the season in Adelaide and Albert Park.