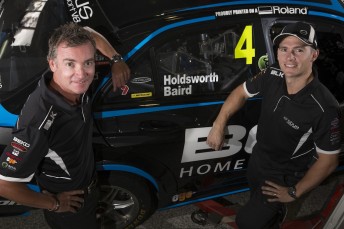 Erebus Motorsport has officially confirmed that Craig Baird will return to the team for this year’s Pirtek Enduro Cup, where he’ll again link with Lee Holdsworth.

As previously reported, the deal sees the partnership continue for a third year and adds to Erebus’ strong second line-up of Will Davison/Alex Davison.

Baird, who is regarded as one of the most successful Porsche racers in the world, jetted out to Korea this morning to take part in the Asian GT series with Clearwater Racing as the announcement was made.

Holdsworth and Baird finished fifth in the Enduro Cup standings last year after a fourth in the Sandown 500, 14th in the Bathurst 1000 and a best of fifth at the GC600.

“Lee and Craig performed fantastically during last year’s enduro series so it’s great to have them teaming up again,’’ said Maddison.

“Craig is an experienced and accomplished driver in his own right and Lee’s championship results for Erebus this year have been great, highlighted by his memorable win at Winton.

“With the advances the team has made so far this year, I know the pair are really hungry to get back in the car together again and we expect them to be equally as competitive if not more than they were last year.

“We believe we have assembled a great team with four pedigree drivers heading into the enduros.’’

Holdsworth acknowledges that the results with Baird in the long distance events where among the best he had for the championship in 2013.

“Our results were really encouraging for the team and they were our best throughout the year,” Holdsworth said.

“Having a driver that’s similar in technique to you is really important and being familiar with the team is a big thing as well.”

“I know a lot of people say this and don’t mean it but I do, Lee and I are really similar in what we want with the car and what we feel so one thing I don’t have to worry about is setting the car up. I have 110 per cent faith in Lee and what he does with the car,” said Baird.

Baird believes that following Holdsworth’s Winton win and continued development of the Mercedes engine package in-house places the #4 car as a podium contender in the trio of long distance races.

“There’s no reason in the enduros that we can’t look at get podiums,” Baird said.

“Last year the reality of podiums and wins probably wasn’t really there, whereas this year Lee has proved the speed of the car and himself, so we are as good a chance as anyone else.’’

The Wilson Security Sandown 500 opens the Enduro Cup from September 12-14 with the Supercheap Auto Bathurst 1000 from October 9-12 while the Gold Coast 600 decides the shared driver events from October 24-26.