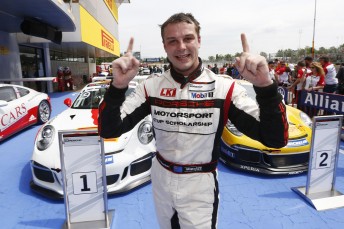 The 23-year-old, competing in his first full season in the Formula 1 support category, produced a faultless drive in the race as he took the chequered flag from polesitter Philipp Eng by five seconds.

“This is totally unbelievable. How fantastic is it to kick off my first season in this series with a win. I’m quite happy if it continues like this,” said the Porsche Scholarship driver.

Bamber will head to the glamorous streets of Monaco for the second round of the championship on May 22-25.

Johnny Cecotto Jr and Williams F1 test driver Felipe Nasr shared the spoils in the second round of the GP2 Series at Barcelona.

Cecotto Jr stormed from 16th on the grid to take out an eventful feature race which was only decided by a pass on DAMS racer Jolyon Palmer in the closing stages. 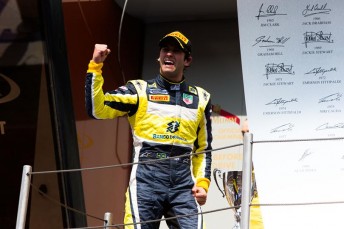 A slick strategy placed Cecotto Jr on the softer compound tyre for the final laps which proved to be an inspired decision from his Trident team. Palmer came home in second ahead of Nasr.

Kiwi Mitch Evans was battling for the lead heading into turn 1 on the opening lap but contact with Stefano Colletti forced the New zealander into the pits. He would eventually finish in 16th position.

Nasr was the star of the sprint race as he fended off Palmer to record his maiden GP2 win after a demon start from sixth on the grid. Arden’s Tom Dillmann claimed the final spot on the podium.

Evans weekend went from bad to worse as tyre degradation contributed to him finishing in 20th position.

Two second place finishes extended Palmer’s lead in the championship ahead of Round 3 at Monaco on May 22-25.

New Zealander Richie Stanaway made a strong start to the new GP3 Series season after finishing third and fourth in the opening two races at Barcelona. 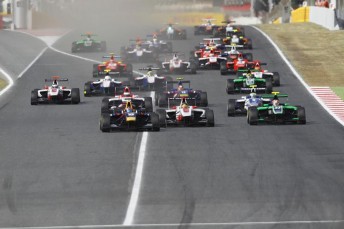 GP3 field heads into Turn 1 at the Circuit de Catalunya

The Status GP driver, who topped the times in practice, converted his third place on the grid into a podium in Race 1, which was dominated by Red Bull Junior driver Alex Lynn.

Stoneman, who only returned to full time racing last year after being diagnosed with testicular cancer in 2011, edged a tense race long duel with Tuscher.

Dino Zamparelli just finished ahead of Stanaway to secure the final spot on the podium.

Australia’s Mitch Gilbert picked up 18 points from an impressive debut at the notorious Pau street circuit in the third round of the FIA European F3 Championship.

The Fortec driver finished sixth in race two and fifth in race three at the French track. Gilbert retired from the first race after being involved in a scary incident with Alexander Toril. 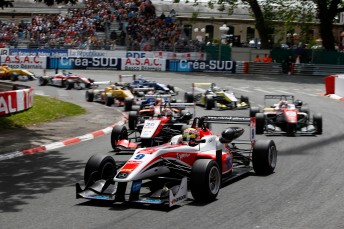 Felix Rosenqvist secured victory in the final encounter from Ocon and Blomqvist.

The factory Citroen driver grabbed the lead in the early stages of the opening race at the Slovakia-Ring held in torrential rain. As a result of the conditions, the Safety Car was deployed on lap seven with stewards declaring the race after just nine laps.

The second race was cancelled due to the dangerous weather conditions. 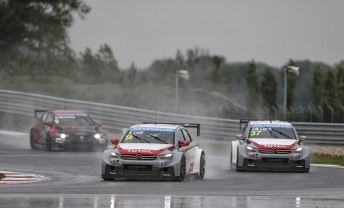 Sebastien Loeb on his way to victory

The GW IT Racing Team’s Kevin Estre and Jaap van Lagen claimed an impressive double in the second round of the ADAC GT Masters at Zandvoort.

Australia’s Nathan Morcom came home in 11th and 13th respectively behind the wheel of the Farnbacher Racing Porsche 911.