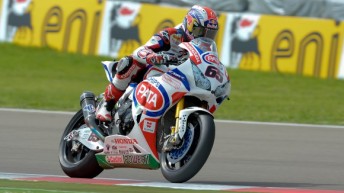 Jonathan Rea on his way to Imola double

Jonathan Rea moved to the top of the World Superbike Championship after completing an impressive double victory in Round 4 at Imola.

The PATA Honda rider dominated both of Sunday’s races confirming the pace shown in qualifying that saw him secure pole position.

Rea’s double triumph moved him to the top of the championship standings by just four points from reigning world champion Tom Sykes.

The Northern Irishman made a strong start to race one with Aprilia duo of Marco Melandri and Sylvain Guintoli hot on his heels.

But it was the Ducati of Chaz Davies which posed the biggest threat as he soon grabbed third and then second spot from the two Aprilia’s.

By the half way point Rea marched into a comfortable two second lead, while a four bike battle developed for second.

However, there was no stopping Rea at the front as he took the chequered flag from Davies and Kawasaki’s Sykes.

Loris Baz came home in fourth ahead of Guintoli and Melandri.

Rea once again showed his dominance at Imola in race two as he produced a commanding ride to record a double victory.

The Ulsterman came under pressure from Guintoli and Davide Giugliano in the early stages before he blew away the opposition yet again.

Behind, Davies, Sykes, Baz and Guintoli enjoyed a titanic scrap for second which played out over throughout the second half of the race.

In the end, Rea cruised to victory while Davies just about held on to second from Guintoli. Baz pipped his team-mate Sykes to fourth as Giugliano crossed the finish line in sixth.

The World Superbike Championship moves to Great Britain’s Donington Park for Round 5 on May 24-25.