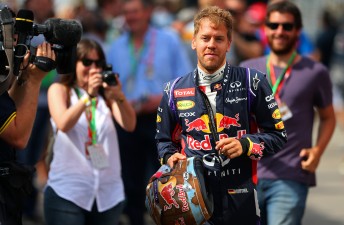 Sebastian Vettel will start from 15th position for Sunday’s Spanish Grand Prix after incurring a five place grid penalty for a gearbox change.

The reigning world champion was unable to post a time in the final part of qualifying at the Circuit de Catalunya when his Red Bull RB10 suffered a mechanical failure.

The German was classified in 10th position but the mechanical problem has left his team with no option but to replace the gearbox on his car, thus incurring a five place grid penalty.

Vettel struggled for drive on his out lap before electing to stop the car on the circuit, which brought out the red flags.

“I left the garage for Q3 and lost drive in second gear; I still had third gear and above so we thought we could do the lap with that, but by Turn 1 I had lost all the other gears, so we couldn’t continue,” said Vettel

“I’m of course quite disappointed.”

Toro Rosso driver Jean-Eric Vergne will start alongside the Lotus of Pastor Maldonado in 21st position after receiving a 10 place grid penalty for losing a wheel in Friday Free Practice.

The incident was deemed a breach of the safety regulations by the stewards.

Maldonado will start from the back of the grid after failing to post a time in qualifying.