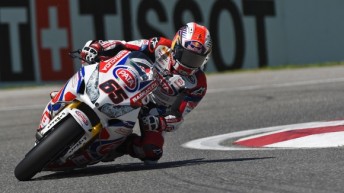 Jonathan Rea will start round four of the World Superbike Championship from pole position after coming through a hard fought qualifying session at Imola.

The Northern Irishman, who won the last round at Assen, continued to state his case for a tilt at the title as he secured only his fourth pole of his World Superbike career.

Rea’s PATA Honda set a time two tenths of a second quicker than the Aprilia of Sylvain Guintoli. The Ducati of Davide Giugliano completed the front row in third.

Giugliano held provisional pole up until the dying minutes of the session. Guintoli snatched the position away from the Italian before Rea shot to the top of the time sheets with a 1.46.289s effort.

Loris Baz will head up row three in seventh alongside the Suzuki of Eugene Laverty.

Niccolo Canepa was the top Evo rider in ninth after coming through Superpole 1 to earn a spot in the final part of qualifying.

Rea’s team-mate Leon Haslam, who suffered a heavy fall in free practice, rounded out the top 10.

A gearbox problem prevented Alex Lowes from posting a time in Superpole 2 and as a result he will start from 12th on the grid.

*Stay with Speedcafe,com for all the latest World Superbike Championship headlines