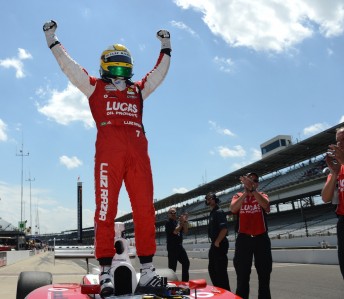 Matthew Brabham, who scored his maiden Indy Lights win in the opening race, narrowly missed the podium with Alex Baron holding on for third.

Brabham had lost track position after an earlier incident before fighting his way back.

The 20-year-old’s win in the wet-dry opening heat came 55 years after his famous grandfather Sir Jack Brabham won his first F1 grand prix on the streets of Monaco.

Razia moves to within five points of leader Zach Veach on the points table with Matthew Brabham holding fifth place on 192, 37 points from his Andretti Autosports team-mate Veach.