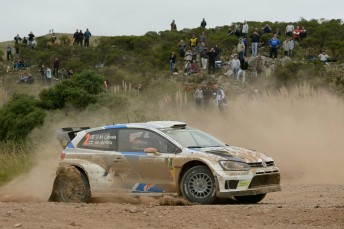 Latvala in the box seat in Argentina

Jari-Matti Latvala heads the charge after the second full day of running at the Rally Argentina.

With no team orders, and despite a handy lead over Kris Meeke in third, an intra-team battle for victory got intense after lunchtime service on Saturday, with both drivers launching an all-out attack on the San Agustin stage that opened the afternoon – and both making mistakes.

A spin apiece showed how hard Latvala and Ogier were pushing, while Latvala also stalled at a junction. Then Ogier suffered a delaminated front tyre, which didn’t so much affect things in that stage, but rather the next when the Polo suffered overheating from the damage to front bumper and the car’s ducting.

Driving without mistakes, Meeke came under pressure from the re-starting Andreas Mikkelsen who sliced a minute off the gap throughout the afternoon.

Thierry Neuville re-started in the Hyundai and after technical problems on Friday he is now back to fifth. Robert Kubica moved into sixth ahead of M-Sport team-mate Elfyn Evans.

Mads Ostberg and Mikko Hirvonen have made it back to 10th and 11th following their Friday crashes.

Dani Sordo has been unable to join those progressing back into the points, as further technical issues forced Hyundai to retire his car completely.

VIDEO: Highlights from the morning stages

VIDEO: Highlights from the afternoon stages