Gordon holds on in Kansas

Gordon holds on in Kansas 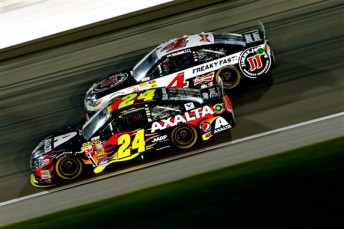 Sprint Cup points leader Jeff Gordon has registered his first race win of the season with victory in Kansas.

Gordon, who is celebrating the 20th anniversary since his first win at the Cup level, held off Kevin Harvick over the final laps to secure his 89th career victory taking the chequered flag in the 5-Hour Energy 400.

It’s the four-time champion’s first win since Martinsville last autumn and it earned him a place in the record book as the first winner of a night race at the track.

“Kevin was tough. He was so strong. I did not know if I could hold him off and I almost didn’t there at the end.

“This is so sweet. What a huge weight lifted on this team’s shoulders.”

Rounding out the top 10 were Carl Edwards, Danica Patrick, Aric Almirola, Jimmie Johnson and Matt Kenseth. Patrick had by far her most impressive effort on a non-restrictor plate track.

Pole sitter Harvick led the most laps in the race. After dominating the opening period of the race, Harvick’s night was put on the back foot when a spin by Australian Marcos Ambrose on Lap 110 produced a caution. Harvick had pitted as the leader six laps earlier while most of the rest of the field did not. That put him a lap off the pace. He did get the free pass, but when the race went green, he was outside of the top 15. His effort in climbing back through the pack came up just two car lengths short at the finish.

The biggest incident of the night occurred when Justin Allgaier and David Gilliland came together in a hard wreck. Both drivers walked away with Gilliland left sore after the hard hit.

“The 51 (Allgaier) came back up the track and I hit him and from there a lot of stuff happened,” said Gilliland.

“We are alright though. Just a little sore obviously. That is one of the hardest hits I have had in awhile. Hopefully it will be the hardest one for awhile to come too.”

A disappointing night for Ambrose who’s spin came after battling handling issues. He would come home 25th at the finish.

Next week the racing action continues for non-championship points with the All-Star event in Charlotte.