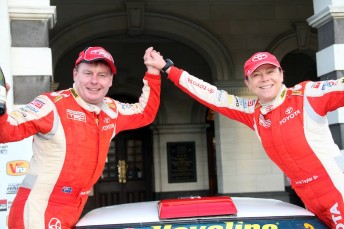 The highly decorated combination guided the classic Toyota Celica RA40 to a winning margin of 1:46s.

Didier Auriol, the 1994 WRC champion and his co-driver Denny Giraudet were fourth in a borrowed Ford Escort RS1800.

Auriol changed the set-up on the Escort and found the car handled more to his liking, taking the final stage win.

Bates and Taylor received a timely wake-up call when they had a scare on stage 10 of the 15-stage rally.

“We’ve had a brilliant event and the car has run perfectly throughout,” Bates said.

“We had a lead of over a minute when we nearly put the car on its roof on the first corner of stage 10, so I decided then it was probably time to back off a bit and make sure we got to the finish.”

Ayson couldn’t match the pace of those in front and win his third Otago Rally but he did manage to hold off a rapidly closing Auriol.

“I was much happier with the car today,” said Auriol, the former Ford, Lancia and Toyota factory driver.

“I made a lot of changes to the car after the first day and it was much better today.

Another Aussie, Ed Mulligan, was eighth in his BMW 325i, just ahead Deborah Kibble in a Mitsubishi Lancer Turbo.