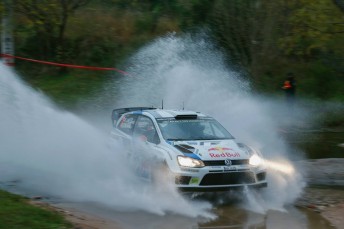 Jari-Matti Latvala heads Rally Argentina from Volkswagen team-mate Sebastien Ogier as the tough opening leg took its toll on many of the leading teams.

The Finn is 17.7s ahead of the Frenchman as the duo traded places throughout the first full day.

The day only had four stages, but they totalled 157.94km and it proved too tough for Mikko Hirvonen, Mads Ostberg, Thierry Neuville, Dani Sordo and Andreas Mikkelsen who all failed to finish the leg.

A dramatic start to the day with Hirvonen and Ostberg both sidelined in the opening 27.09km stage from Santa Catalina to La Pampa (SS2).

On what could be the roughest and toughest Rally Argentina ever, the stage was littered with rocks and compressions where torrential downpours earlier in the year have washed away the road.

Hirvonen hit a wall 7km after the start and the damage to his Ford Fiesta RS was too great to continue.

Next to go was Ostberg, who struck a rock 16km into the stage and ripped a wheel from his Citroen DS3.

After sitting second after the day’s first stage Latvala attacked on the first run over the 51.88km stage from Ascochinga across the Sierras Chicas Mountains to Agua de Oro (SS3).

Latvala powered back to the lead in the second run over the marathon stage setting a time 18s quicker than Ogier to hold the biggest margin of the rally so far.

The Finn was lucky as he finished with two chunks of rubber missing from his front left tyre.

After a number of issues throughout the day, it was a disastrous stage for Hyundai, who lost both i20s.

Sordo stopped 1km after the start with an engine problem and then Neuville, who was driving slowly with similar issues, was asked by his team to pull over rather than risk terminal damage.

Mikkelsen brought the number of World Rally Car retirements to five when he parked his Polo R after 43.90km with what is believed to be an alternator problem.

The punishment on cars and crew will continue tomorrow with four mountain stages all totalling just under 40km each, plus a repeat of the side-by-side superspecial stage which opened the event on Thursday evening.