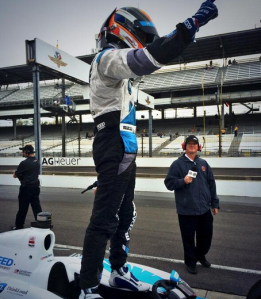 In a thoroughly dominant display Brabham won the timed race on a wet Indianapolis road course by just over 2s.

A week after his UK-based cousin Sam Brabham scored his first Formula Ford pole and race wins, Matthew found the key to winning in the IndyCar feeder category.

The Andretti Autosport driver shot away from the pole position and squeezed out a big lead after a handful of laps.

Luiz Razia gave chase and closed to within a second of Brabham before the son of Geoff Brabham broke clear and out of danger again.

Brabham has done a sterling job in the IndyCar ladder system by winning the US Formula Ford 2000 championship before going on to a record-breaking win in the Pro Mazda Series last year.

“I’m just so happy. The guys have done such a great job,” Brabham beamed.

“To come from where we did in practice to now is just incredible.

“The Cooper Tyres did a really good job holding up, I think, because it was dry at the end so we were just running wets on dry and they held up.

“It was a little bit sketchy in the fast corners, but it was good.

” I think we’re doing a really good job getting on top of conditions now so we’ll just try and hold this same pace throughout the year.”

Gabby Chaves ran strongly early before he started to drop back through the field, eventually limping into the pits with just over 10 laps remaining with smoke streaming from his engine.

The second Indy Lights race is scheduled for tomorrow morning.