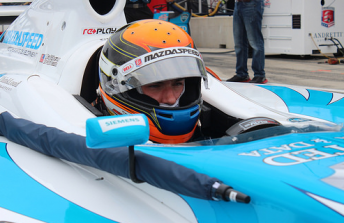 Matthew Brabham has enjoyed his most successful session in Indy Lights by claiming pole position ahead of the twin races at the Indianapolis road course.

Brabham put his Andretti Autosports machine at the top of the qualifying times in 1:18.4256s.

After a difficult start to his rookie Indy Lights season Brabham finally had reason to celebrate ahead of the twin races this weekend.

Colombia’s Gabby Chaves was second fastest in .0796s behind in second place in a session where the times were impossibly close.

Brabham’s Andretti teammate Zach Veach had a rare miss and will start from fifth place alongside Alex Baron.