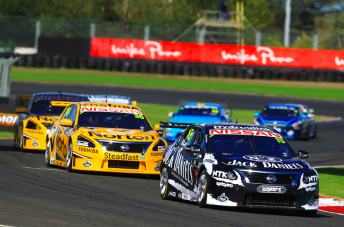 The squad is investing heavily in a cylinder head casting change for its VK56DE, which was given the green-light by Nissan’s Tennessee, USA, parts supply chain late last year.

The work, which requires a limited batch of ‘blank’ heads to be cast specifically for the racing program, coincides with ongoing development in Japan by Nissan’s global performance arm Nismo.

The Japanese engineers have been in possession of a 5.0 litre VK56DE since last November, but are yet to produce new parts for the team to debut.

The cylinder head upgrade, meanwhile, is unlikely to be seen until the final stages of the season due to the logistics involved in such a move.

“We’re still waiting for more results from Japan, we still haven’t got anything that we can implement on our engines at the moment,” Kelly told Speedcafe.com of the development work.

“The whole program that we’ve been working on for quite some time with the modification of the castings, there is a lot of work to do on that still, so it’ll be later in the year until we get everything over and have upgrades homologated.

“It’s frustrating, because the amount of money and the lead times involved in making a casting change are pretty significant. It’s a big deal.

“If there was any way possible to have it earlier, we would, but it’s just not, unfortunately.”

Nissan has endured a mixed start to its second season in V8 Supercars, with top driver Michael Caruso sitting 13th in points heading to Barbagallo later this month. 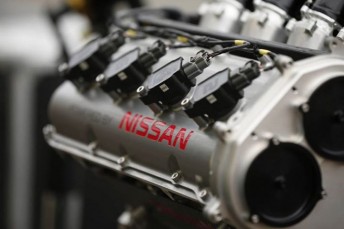 Nissan is the only manufacturer to go winless across the 13 championship races and four non-points Albert Park heats held during the year to date.

Having re-homologated its aerodynamic package over the summer, engine performance stands as the Altima’s biggest area for improvement.

The squad was the first to design a four-valve engine for the class and made a concious effort to align as many of its specifications with the incumbent Ford and Holden units as possible.

“There’s nothing outside of the original engine rules on our engine,” notes Kelly.

“A few of those things would probably be pretty handy for us right now. That makes it tough.”

Having initially attempted to match power curves between each team’s engines last year, the category has subsequently switched to a cumulative power ceiling, calculated by adding horsepower values taken at 50rpm intervals between 5,800rpm and 7,450rpm

A guideline maximum power figure was delivered to teams following a first round of dyno testing last year, while the second round, completed last month, resulted in an increased maximum rating being set in stone prior to Symmons Plains.

It is understood Red Bull Racing’s KRE-sourced Holden powerplant set the pace in the latest testing, having made a sizeable gain over the off-season.

Its cumulative figure is known to be closely followed by those from Dick Johnson Racing (Ford) and the new-for-2014 offering from Volvo Polestar.

While many in the paddock have commented on an apparent power advantage for the Volvo, Polestar appears to have instead made the most of freedoms allowed to it during development, resulting in finely honed torque output and power delivery characteristics while remaining within the parity stipulation.

Regardless, the confirmation of the new target last month caught several teams by surprise and has been followed by a flurry of engine upgrade submissions to V8 Supercars.

None, however, are believed to have been approved as yet; causing frustration for those currently down the pecking order.

Crucially, the spending spree on engine performance comes at a time when many teams can least afford it.

Electing to push ahead with its development work, rather than relying on lobbying for concessions such as a flat-plane crank, Kelly confirms that his Melbourne-based outfit is making a significant investment.

“To develop the ports for the new head and the R&D that’ll need to go in to get the most out of the new casting will be massive. It’ll be in the hundreds of thousands (of dollars).

“Once you’ve done that and you get to that point of implementing that spec on the engine, then that almost hits you just as hard.

“It’ll most likely be different valves and all the running gear will be different to optimsie that. There will be a lot of parts that’ll have to be purchased brand new just to get up and running with it.

“It’ll be a substantial cost, which is pretty hard at the moment.”