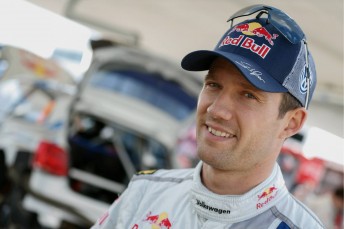 On a side-by-side stage in Villa Carlos Paz, the Volkswagen driver won the 6.04km stage by three seconds from Citroen’s Mads Ostberg. What was impressive with Ogier’s stage win was that the next five cars were covered by less than 2.5-seconds.

“My drive was OK but the set-up was maybe a bit stiff. I’ve driven this stage better in the past,” said Ogier.

Ostberg, whose time was good enough for second, admitted to a slight mistake on the second lap in his DS3. Andreas Mikkelsen was third in another Polo R, beating Hyundai’s Thierry Neuville, whose time placed him sixth. Sandwiched between were Mikko Hirvonen and Jari-Matti Latvala, Hirvonen coming out on top in an all-Finnish duel by just a tenth of a second.

Dani Sordo, who was fastest earlier in the day on the shakedown, was seventh in front of Kris Meeke.

The full first leg will be completed tomorrow with just four stages. However, it totals 157.94km, including two passes over the 51.88km Ascochinga/Agua De Oro stage, the longest of the entire season.