Porsche moves to beef up 919 components

Porsche moves to beef up 919 components 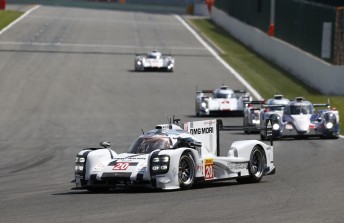 Porsche’s chances on its return to outright competition in the Le Mans 24 Hour will rely on the success of fresh components set to be tested next week.

The crew on the #20 Porsche were forced to change the front right driveshaft twice during the race, an area which had proved troublesome in pre-season development testing.

Porsche says stronger driveshafts will be fitted ahead of a new round of tests before practice begins for the Le Mans 24 Hour on June 1 ahead of the race two weeks later.

The champion marque which has netted a record 16 outright victories at Le Mans will put the upgraded parts under scrutiny in test at Spain’s Aragon circuit next week.

A problem with the Hybrid system which harvests power from braking and exhaust gas which struck the #14 919 was the result of an alarm system which was set at a level which was deemed to be too sensitive.

The false alarms for the #14 of Marc Lieb, Neel Jani and Romain Dumas interrupted an otherwise strong run for the 919 which finished fourth at Spa behind the #8 Toyota TS040.

Porsche came away from Spa satisfied that it has competitive pace to run against the Toyotas and the Audi R18 e-tron quattros with its 2-litre V4-powered hybrids.