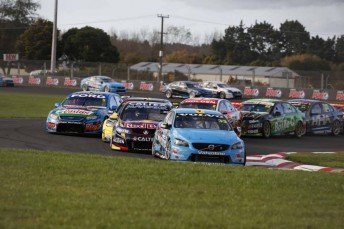 V8 Supercars will meet with a number of automotive manufacturers in the coming weeks to discuss the future direction of its championship.

Three brands – Nissan, Mercedes-AMG and Volvo – have been added to the category’s traditional Ford and Holden mix over the last 18 months under the Car of the Future rule package.

A sixth manufacturer meanwhile continues to be touted as a possibility for next season, particularly with American giant Team Penske still deliberating over its plans for the class.

V8 Supercars CEO James Warburton confirmed to Speedcafe.com that discussions are set to take place with the category’s existing manufacturers, while “opening up dialogue” with potential future players.

“We’ll be doing an update to all manufacturers, reaching out over the course of the next month with where we’re heading, what we’re about and what the evolution is,” Warburton said.

“We’re just opening up dialogue. Other than the incumbents in this championship today, I haven’t really had any dialogue with any of those (other) manufacturers.

“We’re really just opening the lines of communication and talking to them all and assisting the teams (with negotiations to bring in new marques) where we can.”

Warburton says he’ll be meeting manufacturer representatives individually, having previously held what proved to be a one-off manufacturers forum mid-way through last year.

The latest talks come as traditional rivals Ford and Holden assess their future in the sport ahead of the end of their local manufacturing operations in 2016/17.

Respective sponsorships at Ford Performance Racing and the Holden Racing Team/Triple Eight Race Engineering are all understood to expire at the conclusion of this season.

Negotiations are said to be ongoing between the manufacturers and the three teams.

Importantly, the plant closures for Ford and Holden will spell the death of the current Falcon and Commodore models that have underpinned their racing programs since the basis of the 5.0 litre V8 touring car formula began in 1993.

While V8 Supercars has expressed confidence that both marques will choose to continue to market new products via the category, Holden Motorsport boss Simon McNamara recently dismissed following Nissan and Volvo’s lead in shoe-horning a V8 engine into a smaller body shape.

“We won’t race a car we don’t sell, like a Cruze with a V8 engine,” he told motoring.com.au. “It’s just not going to happen.”

Although dropping the tag V8 from its name is known to have been floated as a possibility, the category has shied away from suggestions that it should open up its engine regulations to other configurations.

Warburton made it clear in a state-of-the-nation address in Adelaide earlier this year that providing an entertaining product to fans is the most important factor in attracting manufacturer support.

The CEO also suggests that the spread of results seen so far this season is increasing interest from potential new players.

“I believe it has opened up a fair degree of interest,” he said of seeing Volvo, Mercedes-AMG and Nissan all score a pole or a race win during the early phase of 2014.

“There is certainly now a lot more inbound discussion coming from manufacturers.

“We’ve got no burning desire to add new manufacturers, but obviously we’ll support all the teams in all of the discussions that they have.

“We’d like obviously the mainstream brands as the big ones that come into the championship.”

Toyota has this year continued its reign as Australia’s biggest selling automotive brand, holding an 18.2 percent market share to the end of April.