Pedrosa to compete in France despite surgery

Pedrosa to compete in France despite surgery 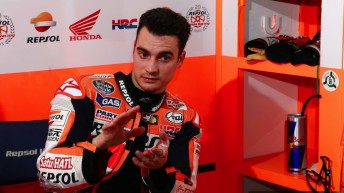 Dani Pedrosa is expected to compete in the MotoGP Grand Prix of France despite undergoing surgery on his arm.

The Honda rider went under the knife in Barcelona yesterday (Tuesday) after suffering from compartment syndrome (arm pump) during last weekend’s Spanish Grand Prix at Jerez.

Although he will be temporarily immobilised, the operation should not hamper Pedrosa’s participation in the French Grand Prix at Le Mans on May 18.

The 28-year-old Spaniard is third in the championship standings and is enjoying a run of eight consecutive podium finishes, which stretches back to his victory in Malaysia last year.

Meanwhile, fellow MotoGP rider Nicky Hayden has revealed he could miss the next round in France after aggravating an old wrist injury at Jerez.

The American Aspar rider battled pain to finish 11th in Spain last Sunday and will assess his injury in the weeks prior to the French Grand Prix.

“It is what it is. I’ll live and we’ll move on. If I had had to start the (Jerez) weekend in this condition, maybe it would have been impossible to race, but I don’t want to speculate,” Hayden told MotoGP.com

“We will see the doctors, get the information and treatment and go from there.”