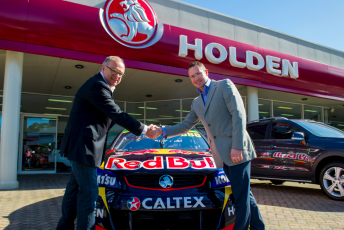 Triple Eight switched from Ford to Holden for the 2010 season, with star driver Jamie Whincup taking the marque to the last three championship titles.

The Holden contracts for both Triple Eight and Walkinshaw Racing were set to run out at the end of this season.

An extension for the factory squad is expected to be revealed at a later date.

Although previously contracted in three year instalments, the new Triple Eight deal is thought to be for two years, aligning with the end of local manufacturing.

Holden sponsorship manager Simon McNamara, who met with V8 Supercars in Sydney on Wednesday, expressed his delight at continuing with Triple Eight for a sixth season.

“Red Bull Racing Australia is the sport’s benchmark team, and together we have already achieved great success on and off-track,” he said.

“They played a pivotal role in the development of the new-generation VF Commodore last year; while a number of business-to-business deals have seen our partnership grow.”

Added Triple Eight principal Roland Dane: “It’s a natural step for us to continue our incredibly successful partnership with Holden.

“Holden’s continued commitment, in what is a changing marketplace, not only demonstrates their faith in V8 Supercars, but also highlights the importance of motorsport as a fantastic sales and marketing tool.”

See below for Holden’s video of the announcement