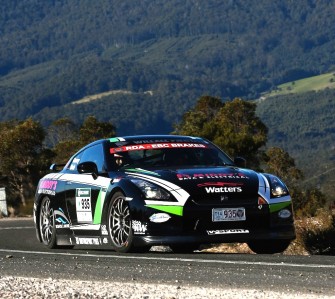 Steve Glenney fires into the lead after day one

Experienced rally driver Steve Glenney has taken an early lead in Targa Tasmania after the opening day of competition stages.

Glenney, the 2008 winner, has stormed to a 27s lead in his Nissan GT-R from Matt Close (Audi TT RS) while defending champion Jason White is 3s further back in third place.

In the Classic car competition, Andrew Miedecke took his 1971 Ford Perana to a 1:24s lead over South Australian Craig Haysman in a Triumph TR7 V8 after the opening eight stages.

But it was Glenney who was on song in the third stage – Sheffield – after covering the 15km distance 16s quicker than his rivals.

“There’s spots where there’s time to be made, a lot of corners and crests and tricky bits, so we pressed on and it was nice to gain some time through there.”

“The car’s going alright, it complains a little bit when we thrash it, but most cars have every right to do that.”

Defending champion Jason White is doing a solid job in the Mitsubishi.

“We’re really starting to warm-up to this car gradually and getting used to the very different aspects of this compared to the Lambo,” White said.

“The higher roll centre is taking some getting used to in the fast stuff, but it’s still quite good, so I think it’s fast enough to keep us around where we are in the field at the moment.”

“We’re more than happy with our stage times and position in the field – it’s better than we thought it would be.”

Early Showroom leader Adam Spence had an off just before lunch, handing the lead to fellow Renault driver, Andrew Bollom.

Devonport’s Dave Thompson is looking to hold on to his lead in the Rookie Rallye that concludes tomorrow as the remainder of Targa continues.

See below video of today’s action