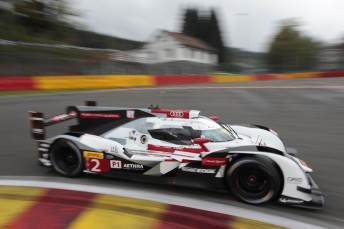 Leading French sportscar racer Benoit Treluyer has warned that Audi may not solve all of the technical bugs that have hampered the champion marque’s 2014 WEC campaign.

Audi staged a comeback a Spa after its crash-riddled opener at Silverstone left the most dominant prototype marque of the last 14 years empty-handed.

Treluyer helped the #2 Audi he shares with Marcel Fassler and Andre Lotterer finish in fifth place, a lap down on the winner and one place behind the #14 Porsche 919 Hybrid of Marc Lieb, Neel Jani and Romain Dumas.

Despite not being in the mix with the Toyotas, Treluyer said Audi had taken a significant step towards the defence of its crown at the Le Mans 24 Hour next month, however he warns it is likely to still encounter problems.

“Overall the drivers, engineers and mechanics have done a good job,” Treluyer said.

“The latter in particular have been simply extraordinary, not least in repairing a receiver’s electrical connection during one of our pit-stops without losing much time.

“Strategy-wise we can be very satisfied, though we still have some minor issues that are masking our true pace.

“It’s unlikely we’ll completely avoid technical niggles, and given the incredible complexity of these cars one problem tends to cause another.”